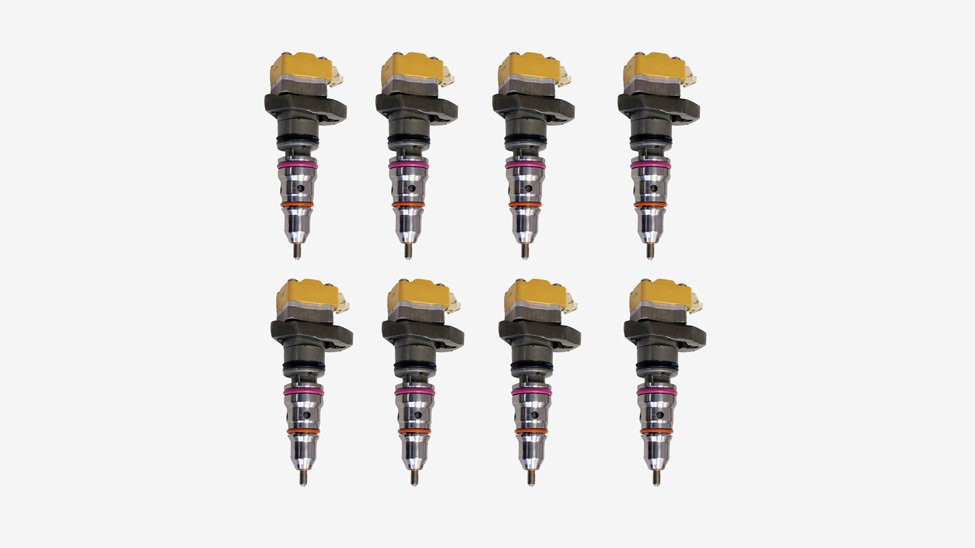 Your 7.3 Powerstroke injectors are the last point in one of the most efficient and effective diesel fuel delivery systems that Ford's ever built.

Still, after almost 20 years since the last 7.3 Powerstroke left the assembly line. And with our beloved 7.3 Powerstrokes routinely racking up hundreds-of-thousands of miles, chances are high that your 7.3 injectors need a little TLC ... if not downright removal and replacement.

But whether you plan to rebuild or upgrade your 7.3 injectors, diagnosis and removal doesn't have to be the tough task everyone makes it out to be.

But before we get to your inevitable, "What are the best injectors for my 7.3 Powerstroke?" question, let's cover some basics.

How many injectors does a 7.3 Powerstroke have?

A 7.3 Powerstroke has eight diesel fuel injectors - one for each cylinder. And at the risk of being too obvious, that's a good thing.

Because rather than a centralized fuel injection system, Ford gave each 7.3 Ford Powerstroke diesel cylinder it's own independent fuel delivery regulator - injector. And not only did that reduce emissions, but it increased performance as well.

Before we get too deep into this, I know it's helpful to review some other 7.3 terms we'll use.

7.3 PCM - Powertrain Control Module - Calculates signals from sensors and communicates with the IDM and other components to manage and operate injectors.

It's almost impossible to understand the firing steps of 7.3 PSD injectors without first discussing the 7.3 high pressure oil pump - HPOP. So if you want to get really detailed, we've written extensively about the 7.3 HPOP in three other articles here on Dead Head Diesel.

But if you don't have time, simply put, your 7.3 HPOP provides oil volume to the oil rails. Then the PCM, using the 7.3 ICP signal, tells your 7.3 IPR how much pressure is needed in order to fire - actuate - your 7.3 injectors. 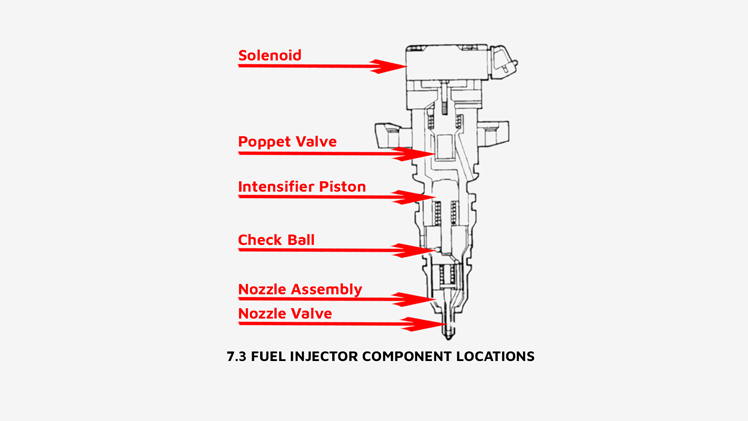 7.3 diesel injectors use electromagnetic - solenoid - controls. At the direction of the PCM, the IDM delivers an electrical signal to the 7.3 injector solenoid, telling it to activate the mechanical valve that controls high-pressure oil and diesel fuel flow in the injector.

The 7.3 injector poppet valve is what allows or restricts the flow of that high-pressure oil into the injector.

In order to regulate and control the opening and closing of the 7.3 poppet valve, the PCM signals the IDM to physically increase or decrease the voltage signal sent to the solenoid. Thus increasing or decreasing the amount of high-pressure oil delivered to the intensifier piston and plunger.

The 7.3 injector nozzle assembly is the "tip" of the injector and the mechanism and components that actually spray the diesel fuel into the chamber. 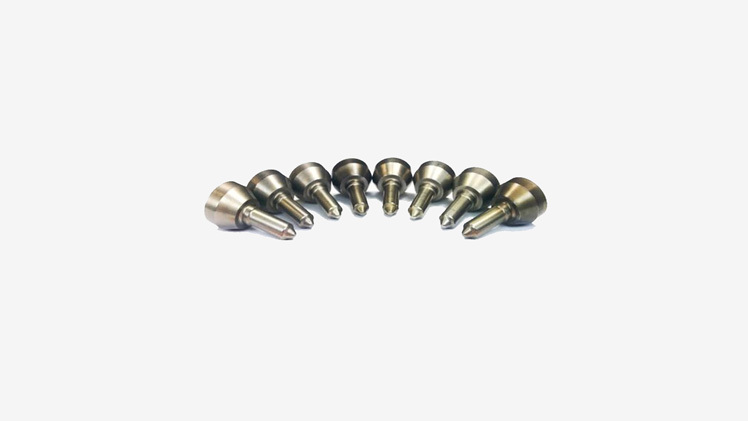 The 7.3 injector o-rings play the important role of keeping the oil on the oil side and the fuel on the fuel side. When they fail—when oil and fuel mix together—white or black smoke comes out your tailpipe and you have a big problem.

First, the PCM reads and interprets signals from various sensors including the ICP. Then it instructs the IDM to send an electronic signal to energize the 7.3 injector solenoid. This pulls the poppet valve off its seat, otherwise held there by a spring. This motion closes off the oil drain and opens the inlet for high-pressure oil to enter. 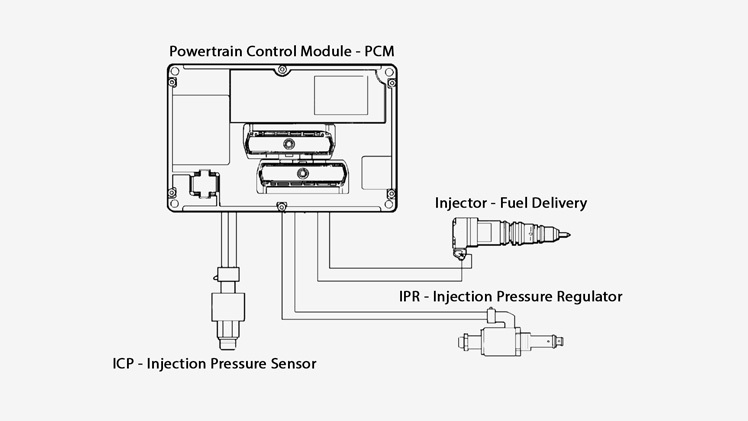 Then the 7.3 HPOP, aided by the IPR, pushes high-pressure oil onto the poppet valve, on top of the intensifier piston.

The action of the intensifier piston and plunger pushing down at the same time creates a void at the top of the injector. This empty space is promptly filled with more high-pressure oil from the oil rails, sent there by the HPOP and IPR.

During all of this, the 7.3 injector check ball seals the plunger to prevent high-pressure diesel fuel leaking.

Aftermarket injectors equipped with larger plungers and barrels reduce the force ratio of the intensifier piston to 5:1 instead of the stock injector's 7:1 ratio. A 5:1 ratio let's a 7.3 injector deliver more fuel without requiring more oil volume.

All these components work together to create a virtually instant and continuous, smooth and reliable fuel delivery feedback loop from the PCM to the combustion chamber and back again. 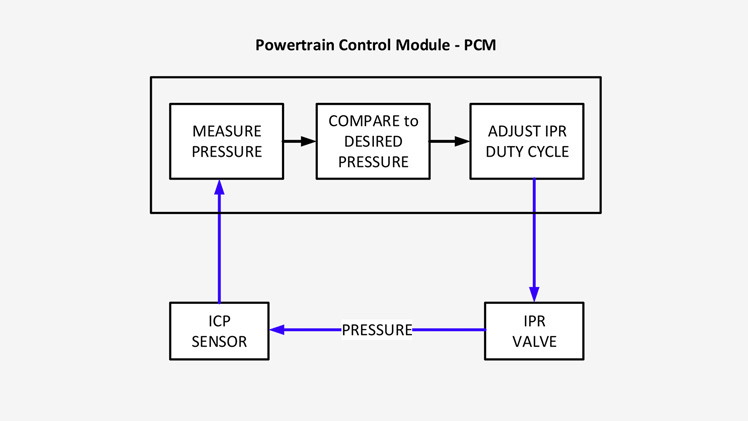 Is your 7.3 injector failed or is it stiction?

The 7.3 Injector piston, barrel, springs and other internal "oil-side" parts are lubricated by a very small amount of oil. And that oil gets very hot. Hotter than you'd think.

Over time the heat breaks down the oil and leaves a residue behind. This residue can create friction and can cause your 7.3 injector piston or spring to hesitate. So much so that your PCM can throw a failed injector code when in reality the friction—stiction—in your injector is causing the computer to think you have a failed injector.

The trouble with stiction is that the symptoms are the same as other 7.3 failed injector symptoms.

If or when you find a 7.3 bad injector, you may experience any one or many of the following general problems that all fuel injectors can get. Stiction or not.

One of the Ford 7.3 injector problems that's closely related to stiction is injector knock. Here's what happens...

Under the valve cover, one of your injectors will develop a "rattle" of sorts. And it will have intermittent missing and emit a sound like bubbles in your radiator. This is caused by air or dirt in the fuel system.

Also, your fuel pressure will fluctuate low during the intermittent missing caused by the sticking injector.

A remedy to this may be as simple as getting on the throttle hard, especially if you've just installed new injectors. Or—as a preventative measure and more commonly needed with older injectors—installing a pre-fuel pump fuel filter, performing a "hutch" mod, replacing your fuel pump, and/or beefing up your FPR—Fuel Pressure Regulator's spring and housing.

Quick Story—From El Dorado Hills, CA down a steep grade on Highway 50 to get to Costco in Folsom, my 2002 F250 Powerstroke started regularly chugging and spitting and missing. It was causing me to experience a puckering and panicking effect coupled with the anxiety of being found on the side of the road with a dead F.O.R.D.

Anyway, it would go away once I headed back up the grade to home. After much scratching my head I figured out that running your 210k mileage 7.3 on 1/4 tank of diesel fuel all the time... Can you say "hutch mod" and fuel pickup filter? Ahhh a topic for another post.

Anyway, a full tank of diesel fuel fixed the problem temporarily ... until I could get to modding.

The 7.3 injector harness, also referred to as the 7.3 "under valve cover harness"-UVCH, is a common failure point on 7.3 diesels.

The wiring between the 7.3 IDM module and the fuel injectors goes through connectors which are molded into the valve cover gaskets. Hence UVCH. And before you go digging into your 7.3 injectors it's worth understanding what the injector harness does and what happens when it's malfunctioning.

If an entire bank—passenger or driver's side of your engine's cylinders—stops firing, there's a good chance that your injector harness has come loose or gone bad on that side.

If you get intermittent misses and sputtering, the connector harness on the outside of the valve cover may have frayed and is shorting onto the valve cover. Here's a great video from the late/great Diesel Tech Ron about it.

White smoke ... is usually ... bad. A little bit when you first start up and warming up might be okay, but after that... Your diesel might be burning coolant, but more than likely diesels spew white smoke when fuel doesn't burn up in the combustion chamber and makes its way to the exhaust system where it comes out as white smoke.

An injector could be loose or bad...

Too much fuel in the combustion chamber. You might get a little black smoke when you stomp on the accelerator, but black smoke during normal everyday driving can mean a bad fuel injector, incorrect timing or bad air-to-fuel ratio. These can be caused by dirty injectors, a worn out turbocharger, dirty intake manifold or even a dirty air cleaner.

Just to make things more difficult to diagnose, low cylinder compression, bad diesel fuel, or carbon buildup in your combustion chambers can all send black smoke out your 7.3's exhaust.

Hard start and/or low power when cold. After 175,000 miles and especially after 200,000 miles, it's normal for your 7.3 injectors' poppet valve, on the oil side, to get worn and cause performance and a poor running 7.3 diesel engine, especially when the engine's cold.

If your 7.3 diesel starts rough and runs rough cold, but then smooths out and gets noticeably better once it's heated up, this could be your issue. Because thinner oil can run though a poppet valve much easier than thick cold oil.

If your 7.3 Powerstroke will start and run when the engine's cold, but dies and won't restart once it's heated up, you could have leaking injectors.

Hot oil's thinner and can't produce the minimum required ICP pressure to keep your 7.3 diesel engine running or (re)start it once it gets hot. This could also be a sign of a worn poppet valve in your injectors not being able to contain the high-pressure oil on the oil side.

Reduced or no power at more than 50% throttle is a sign of worn injectors.

If your truck has a “dead miss” (a cylinder doesn't fire at all)... No matter whether your diesel engine's cold or hot, a dead miss on a 7.3 Powerstroke is likely a problem on the fuel side of one of your 7.3 injectors. When the plunger and barrel assembly gets scored - metal on metal damage - your truck may run rough when it gets heated up.

This 7.3 bad injector symptom is one of the reasons you need to make sure your 7.3 has good clean diesel fuel, great fuel filtration, and enough diesel fuel pressure. Because a bad tank of diesel fuel can immediately and permanently ruin your 7.3 injectors.

To check your 7.3 injector upper o-rings, pull the valve covers and start your engine. Any oil coming from the base of the upper part of the injector where it enters its housing is most likely an upper o-ring failure.

Diagnosing the lower o-rings in a 7.3 injector is more difficult.

Oil in your fuel filter is one of the easiest symptoms to check if you have bad 7.3 injector o-rings. And blue smoke coming out your tailpipe is your first clue - oil burning like fuel in your combustion chamber.

Regardless, if you suspect you have a 7.3 injector o-ring leak, don't just replace the one leaking. Replace them all at the same time.

There are a lot of theories around how and if you should rebuild your 7.3 injectors. From o-ring replacement to a full rebuild. If you're a DIY 7.3 Powerstroke owner like myself, and not a diesel tech, rebuilding your injectors is a job best left to the pros.

Oh sure, you may be able to remove your injectors and you can probably handle a nozzle replacement or o-ring replacement, but completely rebuilding a 7.3 injector?

What are the Best Injectors for 7.3 Powerstroke?

7.3 Powerstroke injectors use either a single shot or split shot firing pattern. Single shot 7.3 injectors deliver one large spray of fuel into the combustion chamber. A split shot 7.3 injector delivers a small initial burst of diesel to "prime" the combustion chamber. That small burst is followed by a larger burst of diesel fuel sprayed into the cylinder.