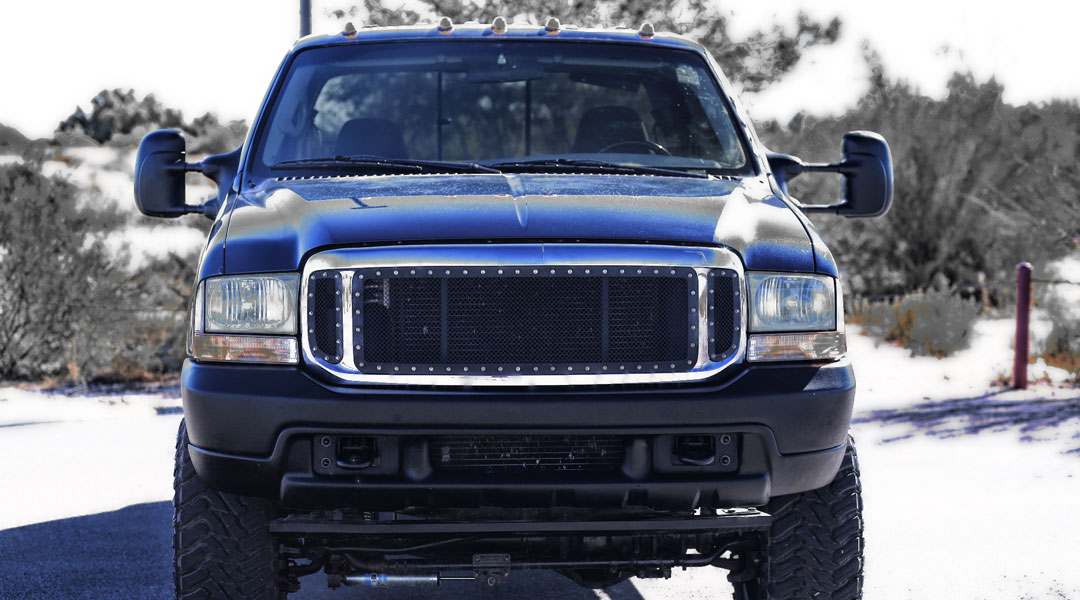 You’ve come to the right place…

I started Dead Head Diesel after surfing the Internet for hours every time I needed to find fixes for my 7.3 Powerstroke performance problems.

Now, I’ll be the first to admit that I’m no gearhead. Nor am I a Ford diesel master technician. I’m simply a ​guy just like you, repairing things myself to save some money.

And the reality is that sometimes that turns out great and sometimes I get bloody knuckles and give my kids a lesson in “Deadwood” style profanity.

But tracking down symptoms, the best parts, and proven performance upgrades for my diesel pickups took more time scouring the Internet than I actually spent fixing problems.

And in this day and technology age, it shouldn’t.​

The answers are out there … somewhere…

Sure, if you look hard enough, the general knowledge on how to fix your common 7.3 Powerstroke problems is out there. But the specifics—the symptoms, tools required, part numbers, torque specs, etc.—are scattered across forums, videos, and blog posts. Or worse, buried in mechanic manuals that you don’t have or can’t find.

What I did find was that the solutions to common 7.3 Powerstroke performance problems were often buried 10 comments down at the end of a forum post or pages deep from the original question on how to fix them.

And many times the “experts” gave several different solutions.

So, I decided to document the standard fixes to the most common diesel engine performance problems I solved on my own trucks. And I chronicled the symptoms of quite a few not-so-common diesel problems along the way.

What I also found was that most high mileage and high use diesel engines have similar problems, depending on their make, model, and diesel engine size.

So I detailed how to fix them complete with images, videos, diagrams and specifications.

Because more than improving the performance of my diesel pickups, I’m interested in them actually performing.

Which leads us to…​

How DHD can Help Increase Your Diesel Engine’s Performance

Let’s face facts, before you beef up your diesel pickup’s horsepower your truck has to be running in the first place.

It’s very hard to increase horsepower, torque or even get better mpg if your diesel cranks but wont start.

So, I gather information, test performance parts, and detail repair and maintenance procedures to each and every one of the most common diesel engine performance problems I run into.

Then I put all that information into easy-to-read, understand, and most importantly FIND and FOLLOW articles on how to fix diesel pickup engine problems.

I do all that so you don’t have to waste your time surfing the Internet for specifics when you could be repairing your truck.

About the Dead Head Diesel Brand

I’m a big fan of marketing, branding, and cool logo-wear like Riffraff and Sinister diesel have.

So I tried to combine a little tongue-in-cheek dark humor with a cool look, company logo, and brand.

I found a Día de Muertos—Spanish holiday Day of the Dead—logo I loved and realized I could play into the fact that my love, the 7.3 Ford Diesel engine, has a so-called “dead head” fuel delivery system. The rest just kinda fell into place.

About the Ford Powerstrokes I’ve Owned

In 1999 Ford changed the boxy body style of their Powerstroke line of 7.3 diesel pickups to a rounded bulldog front end and I fell in love.

I rushed out and traded in my underpowered-for-anything-but-light-towing Toyota V6 and bought my first 7.3 Powerstroke.

Over the Cliff and Through the Mud to…

My most memorable experience with my first Powerstroke diesel was a Wyoming antelope and deer hunt, marked by two near-death events.

The first came after I drove my buddies up a long steep switchback dirt road. One of those freak Wyoming blizzards headed us back to camp in my new diesel truck.

Going down the snow-covered switchback grade was scarier than going up it. And on one of the turns, my F350 slowly headed over a cliff. I figured we’d end up as a pile of metal at the bottom of the canyon.

NOTE: The huge turn radius on the early 1999 7.3 Powerstroke crew cab gave new meaning to the old saying, “Give me 40 acres and I’ll turn this rig around.”

But what I thought was uncontrollable slipping in the snow was only me, panicked, forgetting to depress the clutch. The 7.3 engine was simply overpowering the brakes, shoving us over the edge.

I finally wised up, stomped the clutch, and jerked the stick into reverse. Then I hammered the gas, and literally swung the front end back toward the road.

Back at camp, there were more than a few grown men that needed to change their shorts.

The second “event” came after my buddy Craig, his dog, and I drove down a mud-caked Wyoming backroad into the bottom of a ravine.

Looking at the slick hill as we prepared to drive back up, Craig said, “I’m not going to have my dog ride with us.”

Knowing how fond of his dog Craig was, the statement made me pretty nervous.

At wide open throttle in first gear, a 7.3 Powerstroke’s diesel engine sounds a bit like an angry grizzly caught in a blender. The truck threw mud, rocks, and our brow sweat in every direction… We fishtailed wildly and nearly went over the edge several times.

I’d be lying if I told you I didn’t squeal like a little girl about halfway up the hill. But we finally made it safely back to camp for another “shorts change.”

I figured an automatic would perform better in traffic. It had a beautiful two-toned green with a tan lower paint job.

The “Mean Green Machine” was awesome … until…

Eastern Washington in November is notorious for blowing winds and icy temperatures. And that night was particularly gusty.

I cruised my favorite diesel toward the Spokane airport along highway 395.

Adam Sandler’s “Hanukah song” came on the radio and I reached down to turn up the volume. When I looked back up, brake lights dotted the dark from everywhere. Instinctively, I took my foot off the gas pedal—I knew better than to go for the brakes.

But it was too late.

Instantly, my Powerstroke and I were sliding 60MPH … BACKWARD!

Black ice is not funny—you basically ride it out until it’s over, because you aren’t “driving” anything. The big 7.3 Powerstroke and I headed toward the shoulder, which thankfully was a flat wheat field.

Unfortunately, at the edge of the highway, a Ford Bronco, flipped over on its side, was right in our path. The State Patrol Officer later commented that he had no idea how I missed smashing into that Bronco.

But my front tire dug in and flipped my Powerstroke on its side and then, thankfully, twisted right around the flipped-up Ford. We spun like a top through the wheat until the truck and my guts finally came to a rocking rest.

Staring out the cab at snow blowing across the wheat field, I was surprised at how little crunching metal or shattering glass sounds there were.

That was when my pickup rocked gently and the driver’s side window exploded all over me.

For the next couple hours I stood in the freezing snow, staring at my cliche “Found On the Road Dead” 7.3. My friends finally showed up to flip the truck back on it’s feet. Then I gathered up my “Excessive Speed For the Road Conditions” citation and miraculously drove my truck back to my buddy’s house.

After I flew back to California, my Powerstroke sat in the Washington winter for a month before the body could be repaired.

By the time my buddy, Craig, drove my truck back to the Bay Area, it’d developed a driveway-soaking leak. Back then, I had more money than time or patience to delve into how to troubleshoot and fix the most common 7.3 Powerstroke oil leaks.

And I bought what?

He Who Shall Not be Named – The Accursed Black Chevy…

Don’t ask me, because I have no idea what possessed me to trade in my perfectly repairable 7.3 Powerstroke. But I tucked my tail between my legs and leaked my Powerstroke into a Chevy dealer of all places. Then I traded my F250 7.3 diesel in on an overpriced and under-powered nightmare of a Chevy Silverado 1500, black extra cab.

At least I got the color right…​

The first week I owned it, I backed out of a tight parking garage and kissed a huge concrete pylon just behind the driver’s side door.

Then, at the end of an 18 hour road-trip from California to Eastern Washington, a driver pulled out in front of me and I almost got T-boned. The driver swore he never saw me coming down the two lane highway when he pulled right out in front of me. I just swore…

Back then, I concluded that Chevy’s are evil possessed demons and I am destined to drive Ford Powerstrokes. (UPDATE: I’ve since relaxed my stance on “other than Ford” diesel trucks. And I’ve even owned some. Blasphemy!)

So, back to Ford diesels I went.

My third Ford diesel was a 2002 7.3 Powerstroke crew cab longbed XLT. It was tan, because hey, the “T” in tan is for towing, right?

The “Tan Towing Machine” made the trip back and forth between Seattle and Phoenix countless times. Snowmobile trailers full of household goods, hauling travel trailers for friends… You name it, the big beige beast towed it.

That truck moved me from Seattle to Phoenix to the Bay Area then to Tacoma. I never had one issue with it. That is, until a Ford dealer quoted me an astronomical price to repair the u-joints that started to clunk due to … you guessed it, too much towing.

But by then, Ford stopped making 7.3 Powerstroke diesel engines due to emission standards. Luckily, they’d also been through their 6.0L Powerstroke EGR problem years.

My fourth Ford Powerstroke was a 6.4l elegant beast of beauty. I went back to my tried and true favorite color—black. And for 35,600 and some odd miles we were both happy. The only mishap was a blown injector due to a bad diesel fill up in Northern Oregon.

If you ever start fueling up your Powerstroke diesel and the pump runs slower than molasses in winter, STOP IMMEDIATELY. You’re sucking the bottom of the barrel or the service station pump filters are clogged and you’re putting dirty diesel into your truck. Not only will it kill your 7.3 MPG but it will kill your injectors too.

Thankfully, Ford replaced the injector under warranty, but the writing was on the wall for the big black 2008 Powerstroke diesel.

I sold the truck for almost what I paid for it. Crazy…

At Wheel Kinetics you can buy a truck for below book price, and they deliver you a truck that runs pretty well and has gone through their own shop to repair safety and drive-ability issues.

You can read about my experiences with WK in my Wheel​ Kinetics review.

Let’s just say that Dead Head Diesel is the story of me “putting on my big-boy panties” and dealing with the realities of owning a well-used Ford 7.3l Powerstroke diesel pickup.

Because when you roll into the service department of your local Ford dealership and they quote you $185/hour for labor costs… It’s Crazyfornia, granted, but regardless, at $185/hour, I can perform most standard maintenance and much of the more “difficult” (expensive) repairs myself!

Simply put, I built this site to help you find everything you need to troubleshoot and repair your own diesel.