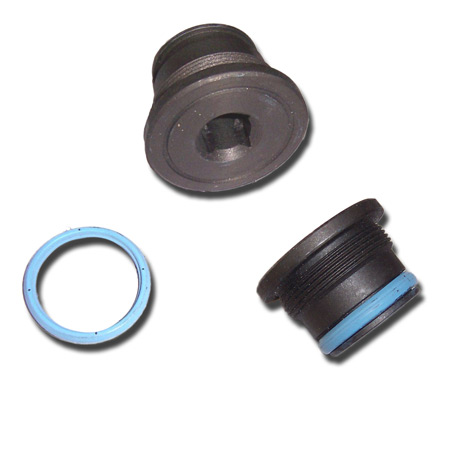 Chances are that the first time you’ll want to learn anything about your 7.3 oil rail plug will be when one of them’s leaking. Because, barring one of your high pressure oil galley’s end plugs or drain plugs seeping or gushing oil, they’re pretty uninteresting. But don’t be fooled — these eight plugs are vital to your high pressure oil system’s proper operation.

There are four 7.3 Powerstroke oil rail end plugs on your truck — one at either end of both cylinder heads. And there are also four oil rail drain plugs — two on each cylinder head, facing into the valley.

But if one of your four oil rail end plugs springs a leak, your high pressure oil galleys will lose oil pressure. And that will affect the performance of your 7.3 injectors. Then you’ll notice your oil galley plugs for what they are — vital for proper 7.3 performance.

There are actually four ports on each cylinder head — for a total of eight. Thy all face into the engine valley.

If you need to remove your injectors to replace the o-rings or to upgrade to new injectors, the oil rails should to be drained first. This prevents the oil in the oil rail from draining into the cylinder and causing hydrolock — damage to the engine.

Oil released from these oil rail plugs will go into the valley for easy removal and cleanup. If you use the larger oil rail end plugs to remove the oil, it will most likely drip down the front or rear of your engine, making a mess.

The smaller, valley-facing plugs can also be used if you’re upgrading / modifying your high pressure oil delivery system to an oil rail crossover kit. (Equalizing oil pressure between your two cylinder heads and the oil rails)

If one of your oil rail end plugs does spring a leak, it’ll drip right down the front or back of your engine and make a mess. That mess will likely be caused by the failure of one of the oil rail plug o-rings. Oil rail plugs require a special o-ring if they begin to leak.

You can currently get them at RiffRaff Diesel by clicking the image or the button below. Diesel O-rings sells an oil rail end plug o-ring kit as well.

It’s also possible that the LocTite 277 (course thread locker) that secures the oil galley plugs may have failed. Or worse, someone forgot to put any on the oil rail plugs the last time they repaired a leaking o-ring.

Step #1 – Remove the oil rail end plug by inserting the square end of a 1/2″ drive socket wrench into it.

Step #2 – Clean the threads on both the end plug and inside the oil rail hole. Make sure to remove the old Loctite completely.

Step #3 – Remove the old oil rail end plug o-ring and place the new one in the groove on the oil rail plug. Or if you’re replacing the end plug, make sure the o-ring is in the correct position on the new plug.

Step #4 – Apply Loctite 277 to the end plug threads and install it into the oil rail.

Here’s a quick video by one of my favorite Powerstroke YouTubers — FordTechMakuloco.

He’s got some good detail shots of removing a badly leaking 7.3 Powerstroke cylinder head oil plug. Then replacing that end plug with a newly resealed plug and o-ring.

Well, there it is — just about all I could dig up on what’s one of the least interesting parts on your 7.3 Powerstroke. That is, until you need to stop one of your oil galley end plugs from leaking…